Architects go back to school - to teach 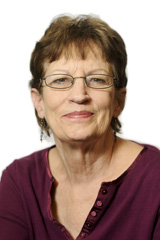 Send questions, comments and story ideas to Beverly at beverly.corbell@ 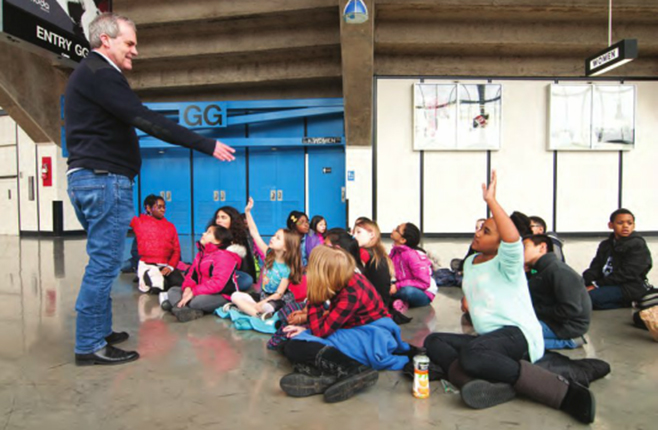 Architect Stuart Emmons, above right, answers questions from Faubion Elementary School students on a tour of Veterans Memorial Coliseum. The tour was part of the Architects in Schools program run by the Architecture Foundation of Oregon. (Sam Tenney/DJC)

Oregon may be the only state in the U.S. where volunteer design professionals visit public elementary schools and teach students about architecture. And according to those volunteers, they get as much out of it as the kids.

Chanelle Wiley, a design and model curator at PLACE Studio in Portland, is in her second year contributing to the Architects in Schools program.

“I never had this opportunity as a young kid and to be exposed to it in elementary school is such a gift,” she said. “I wondered how (the students) would grasp some of the concepts, but they totally catch on and they really excel. It blew me away.”

Kim Knowles, associate director of Architects in Schools for the Architecture Foundation of Oregon, said the 40-year-old program, which recently began its annual six-week run, was originally intended to be nationwide. Portland architect Marjorie Wintermute started the program in the 1970s, and then AFO took the reins in 2003.

“She has really helped make sure the program could have the longevity that it has, long before it was statewide,” Knowles said of Wintermute. “There are other cities that have a curriculum they provide to schools or do some sort of programming in schools, but I have not found another program where a design professional actually goes into the classroom.”

Architects in Schools has expanded out of Portland to other areas in Oregon, Knowles said. Approximately 80 classrooms in Multnomah, Clackamas and Washington counties are being served this year. She said 68 design professionals and five University of Oregon graduate students are participating this year.

“We started the statewide program in 2006 and it took a couple of years to get it going, but now we’re ongoing in Salem, Eugene, Medford, Ashland, Bend, Tumalo and La Pine,” she said. “Actually, anywhere in the state that we can get a (design) professional and teacher together we will, and we’ve also been in Hood River, Corvallis and the Oregon coast.”

Volunteers receive training in the fall and then in the spring they each spend at least an hour each week in the classroom.

Brian Libby, above right, an architecture writer and an advocate for preservation of Veterans Memorial Coliseum, speaks to elementary school students about the building’s history while co-leading an Architects in Schools tour. (Sam Tenney/DJC)

But students also learn about design by building their own structures in class, Arehart said.

“Our residency goal this year is to design 10 tributes to notable Oregonians,” he said. “We will be designing the siting, programming and building a scale model.”

One of those people who will be depicted, he said, is Sacajawea, who helped lead the Lewis and Clark expedition in the early 1800s. Her story will be tied to teacher Jamie Makara’s instruction.

This is Arehart’s third year as an Architects in Schools volunteer. He said he loves interacting with the kids.

“For me it’s a really good energy source,” he said. “Not all 60 want to be architects, but we can show how professional steps can help them achieve goals and also about setting goals.”

Wiley this year will work with teacher Melissa Dunn’s fourth- and fifth-grade students at Skyline School in Portland. Wiley is planning to repeat last year’s project – designing buildings for 25 years in the future.

Wiley said she believes the students learn a lot. She was amazed at the concepts they understood.

“Each student wrote me a small thank you card and almost every one of them had a little drawing of an elevation,” she said.

Nathan Corser, global director of design and design principal at engineering firm CH2M HILL, has been an Architects in Schools volunteer for 15 years. He said it’s a lot of work, but worth it – both for him and his students.

Corser said he usually works with fourth- and fifth-graders, but this year he is working with second-graders at the Beverly Cleary School in Portland. He plans to help students understand the history of architecture.

“When you pull up an image of the (Roman) coliseum or the Eiffel Tower, even second-graders know about these things,” he said. “It’s really fun to walk them through it, to talk about how man made shelter and what does it say about the people that built them.”

“It’s fun getting them to say things like ‘pilaster,’ ” he said.

Even though Corser has many years of program experience, he said every year he worries about the time commitment – always more than an hour per week. But he’s always glad he participates.

“It’s very refreshing for me to hear their input and see their excitement,” he said. “It always feels like a burden, but it makes a difference.”

People interested in becoming an Architects in Schools volunteer next year will be able to sign up in August, Knowles said. More information is available at: https://af-oregon.org/programs/architects-in-schools.