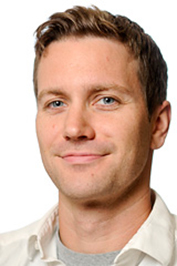 Send questions, comments and story ideas to Garrett at garrett.andrews@ 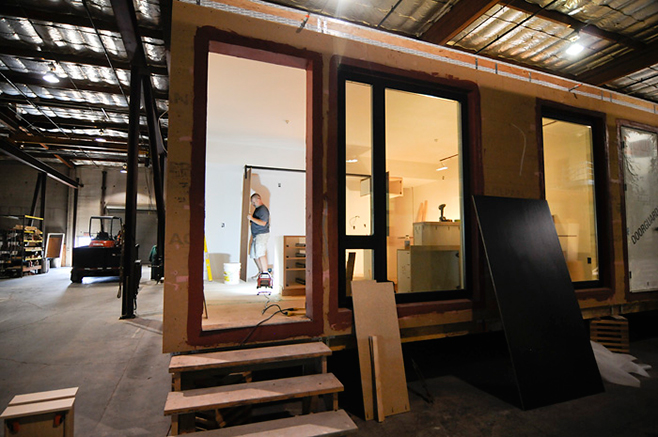 Tony Wood, a woodworker with Signature Creations, installs cabinets in a modular unit being assembled at MODS PDX in North Portland. (Sam Tenney/DJC)

With the housing market resurrected, architect and modular construction advocate Stuart Emmons wants to put that emerging building method to use for affordable housing in Portland. But before that can happen, a “pipeline” of public funding is needed to make subsidized housing profitable for investors.

The problem is that in Portland affordable housing construction is many more times expensive than market-rate.

“The modular world is disjointed right now in the Pacific Northwest,” Emmons said. “And architects, developers, contractors, installers, financiers are not in sync for maximum efficiency that will be able to deliver housing at less cost.”

Modular construction is the process of building standardized structural components in factory conditions and assembling them on-site. Buildings are produced this way in “modules” about the size of shipping containers that are trucked to job sites and put into place by cranes. 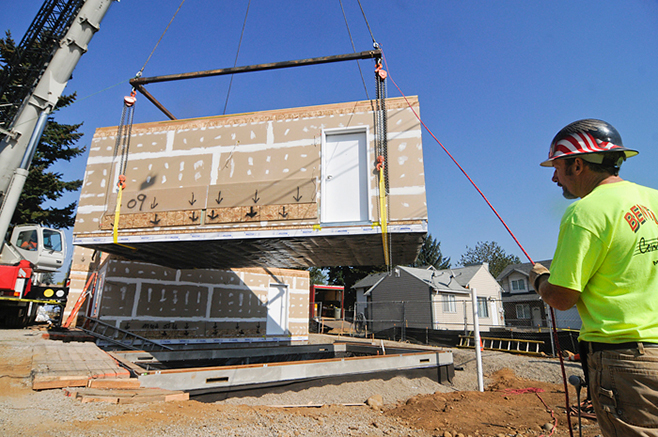 The modular method, first widely used in Europe, has been around for decades (hotels built for the 1968 World’s Fair were prefab). And though not common here, local modular examples include the Edison seven-unit apartment building on North Willamette Boulevard and the Kah San Chako Haws nine-unit affordable housing development (designed by Emmons) in East Portland.

Advocates like Emmons claim all manner of benefits. The process is said to cut construction times by up to one half. It’s highly replicable, which can reduce design costs. And site work can occur concurrently with construction, further shortening project schedules.

With time being as good as money in the construction field, modular is being recognized for its vast potential.

“It’s starting to catch on. It’s definitely a paradigm shift,” says Nathan Young, one of the metro area’s only large modular manufacturers.

Unfortunately for both modular construction and affordable housing, the revitalized housing market has resulted in renewed interest in site-built construction, according to Emmons. Plus, change happens slowly in the building community.

So far, only a handful of properties in Portland have been built via a modular method.

“The industry itself has to be open to change,” said Randy Duggan, Pacific Northwest business development manager for Idaho-based Guerdon Enterprises.

Due to the blocky nature of prefab modules, they have proven to be a good fit for basic and boxy buildings, like correctional facilities and military barracks. Oregon’s largest modular builder – Blazer Industries of Aumsville (175 employees) – focuses primarily on large commercial buildings, like classrooms, offices and highway rest stop facilities. Humble aesthetics also make prefab modules a good fit for affordable housing, says Emmons, though he insists affordable housing can be nice too.

“If an architect cares and is somewhat talented, there’s no reason a project can’t look great,” he said.

Modular builders say the high up-front costs associated with the method prevent bids on affordable housing projects. As a result, groups like Portland’s Meyer Memorial Trust have stepped in to “fill the gap,” according to Michael Parkhurst, program manager for the trust’s affordable housing initiative. It will provide $15 million to help pay for property-specific plans through 2019. The deadline to apply for the second round of funding ends Oct. 23.

“The projects in the area have been one-offs. We have to scale up production to build up a pipeline to lower the unit cost,” Parkhurst said. “It’s hearts and minds.”